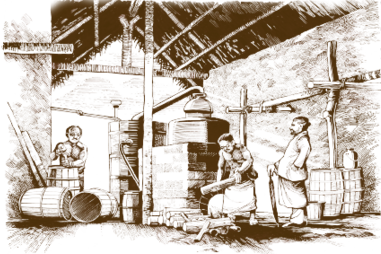 Present in Sri Lanka for over a century, The Distilleries Company of Sri Lanka PLC (DCSL), is one of the most profitable and well-respected corporate entities in the country. Its proud tradition, rich heritage and proven credentials have made the Company a beacon of inspiration for others. Over the past 100 years, our corporate
DNA has been strengthened with our values of tradition, quality, innovation, resilience and the determination to succeed.

DCSL’s roots can be traced back to 1913, when the Excise Department of Ceylon, which was initially created as the enforcement authority to distribute and sell liquor products in Sri Lanka, branched out into the distillation and manufacture of liquor products. In 1974, the State Distilleries Corporation was incorporated by statute, to take over this venture, while the Excise Department realigned its operations as a monitoring body.

Thus, DCSL has the distinction of being the pioneer distiller in Sri Lanka. In 1989, under a government policy decision, the State Distilleries Corporation was converted into a limited liability company. This transfer of ownership to Milford Exports (Ceylon) Ltd took place at the Colombo Stock Exchange (CSE) in 1992, making it the largest transaction in the history of the CSE at that time.

Under this new management, the Company entered an era of modernisation that encompassed upgrading of machinery and equipment to state of the art, large investments in Research & Development (R&D) as well as uplifting the skills of our people at all levels.

DCSL has experienced unparalleled growth in the last three decades. It is now a Fitch triple-A rated company, been included in Forbes’ Best Under a Billion list 3 times and has consistently been named in the Business Today Magazine as one of the Top Ten Corporates since the inception of this index until the Company became a subsidiary of Melstacorp PLC in 2016. Melstacorp is also rated triple – A by Fitch.

The Chairman, Mr. Harry Jayawardena, addressing guests at the 25 years anniversary celebrations and the launch of the centenary blend Argenté